Radomsk (Hebrew: רדומסק‎) is the Hasidic dynasty named after the town of Radomsko in Łódź province, south-central Poland. The dynasty was founded in 1834 by Rabbi Shlomo haKohen Rabinowicz za »tsal (also known as  »Tiferes Shlomo » after his successful book of wisdom), one of the greatest Hasidic masters of the 19th-century in Poland. His son, grandson and great-grandson led the dynasty in turn, attracting thousands of followers. On the eve of World War II, Radomsk was the third largest Hasidic dynasty in Poland, after Ger and Alexander.

*The great principles of Radomsk Hasidut :

– To always behave as a Mensch and to be Kidush Hashem,
– To help eachother among Radomskers (religious or not),
– To treat women with a lot of respect and kindness,
– To refer to a Tzadik to adress one’s requests to Hashem in order to help our prayers to be heard. It is said that a Tzadik is like a madrega (stair) to Hashem,
– Tiferes Shlomo strongly recommends to pray for other people, to bless them and help them,
– To teach and learn Torah with simches leben (joy) and have sense of humour,
– To do tzedaka (charity),
– Tiferes Shlomo loved Eretz Isruel and encouraged people to make alyah (emigration) to the Holy Land,
– A particularity about cashrut : the goose is kosher, therefore its liver can be eaten. But because it is absolutely forbidden to make an animal suffer, Tiferes Shlomo wisely declared that foie gras (fatty liver) is not kosher.

The town of Radomsko was invaded and most of its Jews deported and killed during the German occupation of Poland in World War II. The fourth Radomsker Rebbe, Rabbi Shlomo Chanoch haKohen Rabinowicz, was murdered by the Nazis in the Warsaw Ghetto in 1942, bringing the father-to-son dynasty to an end. In 1965, Radomsker Hasidim who had survived the Holocaust and were living in Israel asked Rabbi Menachem Shlomo Bornsztain, the fifth Sochatchover Rebbe and a descendant of the first Radomsker Rebbe, to become their Rebbe as well. He agreed.
Rav Bornsztain’s son, Rabbi Avrohom Nosson Bornsztain, is the current Radomsker Rebbe.

Every 29 of Adar, the Hasidei Radomsk meet in Radomsko to pray in the ohel (tomb) of the great Tzadik Tiferes Shlomo za »tsal on his Yurzeit (anniversary of death). We start this moving evening by singing the Tfilu Norau, wrote by Tiferes Shlomo, to ask Hashem a good parnassa (abundance) and good blessings (see the first video).
Tiferes Shlomo was reknown to be a « ness macher » (a miracles maker).

The famous Rebbe of Sanz, Rabbi  Chaim Halberstam za »tsal, declared that Tiferes Shlomo holds the Key of Parnuissè (Abundance). It is also said that he is at the door of shabbes (shabbat). Until today, many Jews who respect shabbat and especially the entry of shabbat at the exact time, who give tzedaka (charity) and who pray the Tfilu Norau with kavana (fervor) every day, have seen their financial health recovering miraculously !

You face financial difficulties ? Or you want to achieve a project close to your heart ?
Engage yourself to respect shabbat, light the candles on time and pray every day for 40 days and with fervor the Tfilu Norau of Tiferes Shlomo, Baal haParnassa. You may see miracles !

If you want to receive the Tfilu Norau of Tiferes Shlomo by e-mail, in Hebrew, in phonetic and its translation into English, click here.

The founder of the dynasty was Rebbe Shlomo haKohen Rabinowicz (the Tiferes Shlomo, 1801–1866), who began serving as Rebbe of Radomsko in 1834. Under his leadership, the Jewish community of Radomsk grew both in prestige and population. When Grand Rabbi Moshe Biderman of Lelów za’’tsal moved to the Land of Israel and instructed his Hasidim to follow haRuv Rabinowicz, the latter’s influence as a Rebbe grew significantly and Radomsk became a major Hasidic center. The masses revered their Rebbe for his lofty prayers, beautiful singing voice, and benevolence towards their needs, while the more scholarly Hasidim admired his profound discourses in halacha and kabbalah. Rabinowicz’s discourses on the chumash (Bible) and Jewish holidays were published posthumously in Warsaw in 1867–1869 as the two-volume  »Tiferes Shlomo ». This work, considered a textbook of Hasidic thought, met with widespread acclaim and has been continuously reprinted.
Upon the Rebbe’s death in 1866, his youngest son, Avraham Yisachar Dov haKohen Rabinowicz (1843–1892), succeeded him. Rabbi Avraham Yisachar Dov was also a great Torah scholar and was musically gifted. After he became Rebbe, he attracted many Hasidim from Poland and Galicia. He suffered from diabetes and died in Radomsk a year shy of his fiftieth birthday. His Torah teachings were compiled under the title  »Chesed L’Avraham », published in Piotrków Trybunalski in 1893.

He was succeeded as Rebbe by his second son, Rabbi Yechezkel haKohen Rabinowicz (1864–1910), who had initially served as Rav of Nowepole. The third Radomsker Rebbe was known for his dedication to Torah study, his extreme modesty, and powerful sermons. He suffered from diabetes like his father and also died before the age of 50. An estimated 25,000 people attended his funeral from all over Poland and Galicia. His Torah teachings were compiled under the title  »Knesses Yechezkel », published in 1913.

His eldest son, Rabbi Shlomo Chanoch haKohen Rabinowicz (1882–1942), succeeded him. The fourth Radomsker Rebbe was a dynamic and charismatic leader. Thousands of Hasidim attended his court on Shabbes and Jewish holidays. The Rebbe was very wealthy, one of the top 10 millionaires of Poland at that time. He owned a glass factory and houses in Berlin, Warsaw, and Sosnowiec; he re-established his court in the latter city after World War I. The Rebbe amassed a huge personal collection of old manuscripts and prints that was said to be the second-largest private library in Poland after the one of the Gerrer Rebbe, za »tsal.

The fourth Radomsker Rebbe innovated a new trend in Hasidic education in Poland. Until World War I, Hasidic youth traditionally studied Torah and learned the customs and lore of their dynasties in shtieblech (small houses of prayer and study) across Poland. As the war uprooted hundreds of thousands of Jews and decimated established communities, the shtiebl lost its central place in Hasidic life. In 1926, the Rebbe announced his plan to create a network of yeshivas called  »Keser Torah » (Crown of Torah). By 1930, nine yeshivas were functioning in major Polish cities such as Będzin, Podgórze, Chrzanów, Wałbrzych, Oświęcim (Auschwitz), Częstochowa, Łódź, Kraków and indeed in Radomsko (ul.Mickiewicza 5/7). There was also a  »Kibbutz Govoha » (high-level study group) for advanced students and avreichim (married students) in Sosnowiec. The Rebbe appointed his son-in-law, Rabbi Dovid-Moshe haKohen Rabinowicz (1906–1942), to serve as rosh yeshiva (Director) for the entire network. By 1939, there were 36  »Keser Torah » yeshivas enrolling over 4,000 students in Poland and Galicia. The Rebbe paid for the entire operation, including staff salaries, food, and student lodging, out of his own means. 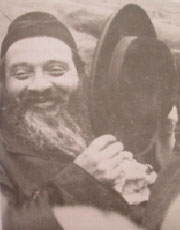 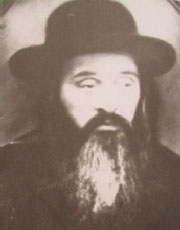 On the eve of World War II, Radomsk was the third largest Hasidic dynasty in Poland, after Ger and Alexander. In Kraków, there were more Radomsker shtieblech than Gerrer shtieblech.
Following the German invasion of Poland, the “Keser Torah” yeshivas disbanded. When the war broke out, the Rebbe was in Lódź. He escaped to the nearby town of Alexander. His Hasidim completed arrangements to send him to Italy by mid-1940, but he refused, saying  »I want to be with all the Jews ». Unfortunately, he was caught by the Nazis and was sent with his family to the Warsaw ghetto. His son-in-law, Rabbi Dovid-Moshe Rabinowicz, was also incarcerated in the Warsaw Ghetto, where he continued to deliver shiurim (classes) to “Keser Torah” students. The Rebbe and all the members of his family, including his wife Ester, his only daughter Reizele, his son-in-law David-Moshe, and their little boy, were killed during the  »aktion » of August 1st 1942 (18 Av 5702).

When the Nazis stormed his house with the intention of deporting its residents to the Chelmno extermination camp, the Rebbe refused to leave, stayed in his armchair and said:  »I know you’ve come to kill me. I prefer to die here in my house and not in a car filled with poison gas ». The soldiers were so impressed by his noble attitude that they didn’t know what to do. Only when the bestial commandant arrived and shouted to shot them were they assassinated.  He then recited the  »Shema Yisrael » and he was shot in the head when he reached the last word Echad (One). Same fate for his family members. They are buried in a special grave in the Warsaw’s main Jewish cemetery.
With the Rebbe’s death, the father-to-son lineage of Radomsker Rebbes came to an end. The Rebbe’s brother, Rabbi Elimelech Aryeh haKohen Rabinowicz, Rabbi of Pławno, died in Mauthausen. 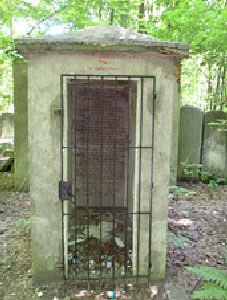 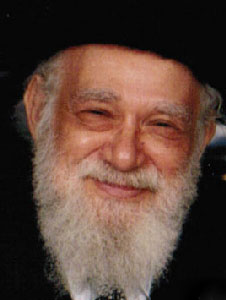 After the war, the Rabbi Cheskiel Besser z’’l (New York), whose father had been an advisor to the Radomsker Rebbe, compiled the Torah teachings of Rabbi Shlomo Chanoch haKohen Rabinowicz and of his son-in-law, Rabbi David-Moshe Rabinowicz, into the sefer « Shivchei Cohen » (« Praises of the Cohen »).

After World War II, Radomsker Hasidim and “Keser Torah” yeshiva students who had survived the Holocaust established a Kollel “Keser Torah” in Bnei Brak, Israel. In 1965 they approached Rabbi Menachem Shlomo Bornsztain, son of the Sochatchover Rebbe and a nephew of Rabbi David-Moshe Rabinowicz, to lead the kollel (Rav Bornsztain was also a direct descendant of the first Radomsker Rebbe, as his grandfather, the second Sochatchover Rebbe, married the daughter of the first Radomsker Rebbe).

The first Radomsker Rebbe, Rabbi Shlomo haKohen Rabinowicz, had a beautiful singing voice and was renowned as a chazan and composer of Hasidic music. He composed and sang new nigunim (spiritual melodies) each year for the Jewish holidays.

He also sent money to one of his Hasidim in Tzfat (Safed), Israel, so the latter would organize a Radomsker Shalosh Seudos meal every Shabbat during which his nigunim would be sung. The second Radomsker Rebbe was also musically gifted, and the nigunim of the first two Radomsker Rebbes were sung in all Radomsker courts.

Rabbi Cheskiel Besser produced an album titled  »Nigunei Radomsk » (Melodies of Radomsk) after World War II to preserve the music of the dynasty.

Nigunim composed by the Great Tzadik of Radomsk,
haRuv Shlomo haKohen Rabinowicz za »tsal, the  »Tiferes Shlomo », in 1866,
including the famous air  »Shalom Alechem » (Welcome to the angels,
created by the Ari Zal) for Kiddush on Friday evening. Here are 4 of the loveliest tunes
(Extract from the  »Yizkor Buch » of Radomsk). 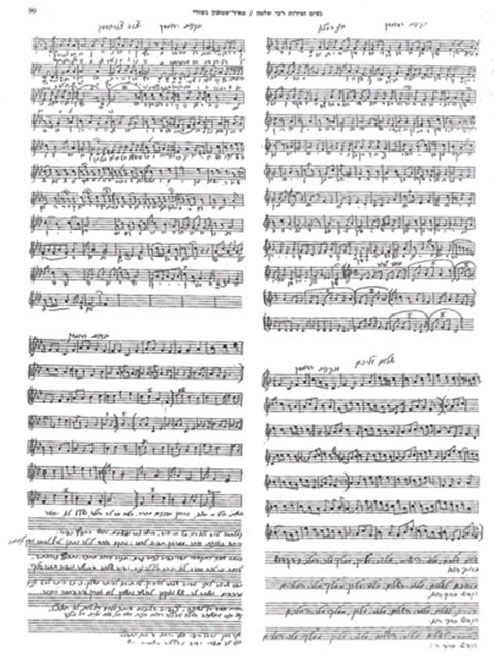